Master of Arts
in European Studies

Welcome to the website of the Double-Master of the European University Viadrina Frankfurt (Oder) in cooperation with Istanbul Bilgi University!

"The BİLGİ / Viadrina Double Degree in European Studies" is a joint program between the Graduate School of Social Sciences of Istanbul Bilgi University, İstanbul (Turkey), and the the Faculty of Social and Cultural Sciences of European University Viadrina, Frankfurt (Oder) (Germany).

Since 2007 the double degree program has given students the possibility to deepen their knowledge on the South-Eastern dimensions of Europe, especially Turkey, within a distinctive focus on EU-Turkey relations. Participants spend two semesters at the partner university (usually the third and fourth semester) and are closely connected to the European Studies departments at the partner university.

The majority of courses at BILGI are held in English while, with its emphasis on multilingualism, Viadrina offers courses mainly in German, but also in English, French and Polish. The Master thesis will be written under co-supervision, with one supervisor from Viadrina and one from BİLGİ.

Having fulfilled these joint requirements, students will be awarded a “Master of Arts in European Studies” from both universities.

Before the talk an informal get together of Bilgi Viadrina Double Degree Alumni will take place. For further information please contact geiger@europa-uni.de

General Info about the Program Structure

The "BİLGİ / Viadrina Double Degree in European Studies" is a joint program between the Graduate School of Social Sciences of Istanbul Bilgi University, İstanbul (Turkey), and the The Faculty of Social and Cultural Sciences of European University Viadrina, Frankfurt (Oder) (Germany). After completing the double degree program successfully students will be entitled to two degrees in European Studies.

Double Degree students usually spend their first and second semester at their home universities and during their semesters abroad they are registered as regular students/double degree students at the partner university. Credits gained at the partner university will be acknowledged and transfered to the home institution and count towards the Master degree. Courses can be selected according to the students’ chosen major (usually in the field of politics). At İstanbul Bilgi University the courses can be chosen from both the European Studies and International Relations Course Lists. At European University Viadrina students are allowed to choose their courses from European Studies Course List. Here you can find the current course catalogue and more up-to-date information (in German). To see how to convert grades between the universities look here.

The Master thesis is usually written during the fourth semester under co-supervision of professors from both universities. A minimum of 30 ECTS in addition to the Master thesis and oral exam (24 + 6 ECTS) must be achieved during the study abroad. Here you can find the conversion scale for master programs. Your grades will be transferred according to this table.

Here you can find a Example of a Double Degree Curriculum (Viadrina and BİLGİ Students/Political Science).

Here you can find a list of sample master thesis topics. 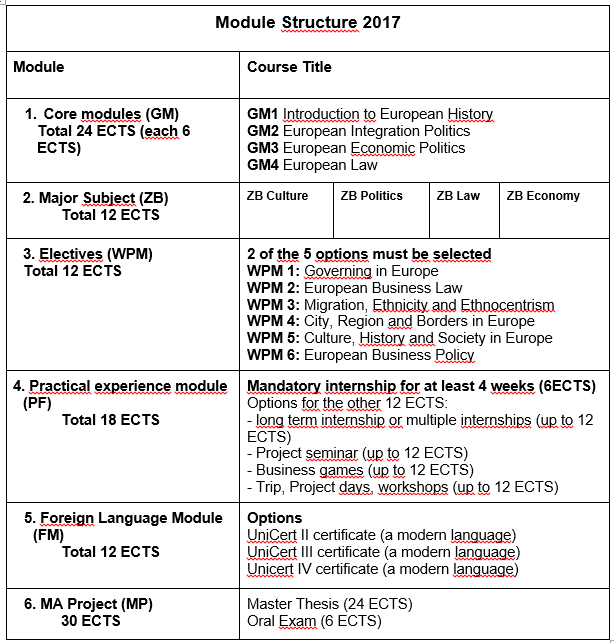 The application procedure takes place once a year during the summer. The application deadline is, same as for the regular Master of Europeans Studies (MES) program, on the 15th of July.

Up to five students from each university are selected every year.

Prospective students have to go through the regular application procedures for the Master of European Studies as they are outlined on the Viadrina's central study portal. Please mark the box "Bewerbung um ein Doppelmasterprogramm". All procedures mentioned there apply for them as well, the only difference being that additionally, a motivation letter and a CV in English are to be submitted. The motivation letter should outline clearly not only your interest in studying the MES, but also the double degree program. 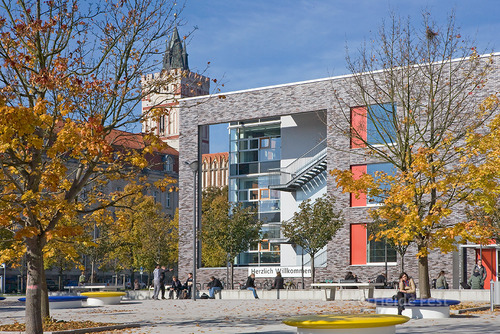 Students are required to have a good to very good command of English (UNIcert II or equivalent).

For Viadrina students, basic command of Turkish is an advantage, but not a requirement for the application.

All students are obliged to complete a Turkish language course during their stay in Istanbul which will count towards their grade (may be waived for native Turkish speakers).

Viadrina University has an emphasis on multilingualism. Courses are offered mostly in German, but also in English, Polish and French. We therefore strongly recommend all Turkish applicants to demonstrate a basic to good command of German.

Further study of German is supported on-site: Turkish students have the possibility to attend a German courses during their stay at Viadrina free of charge at the Viadrina Sprachenzentrum.

It is possible for Bilgi students to succesfully complete the program without having any language proficiency other than English. But, if this is the case for you, please be aware of the fact that course selection opportunities will be very limited!

Documents needed for an application:
If you have further questions, please do not hesitate to contact the coordinator Ruth Geiger.
For all your inquiries regarding the Program at BİLGİ, please contact the Program Coordinator:
Assist. Prof. Özge Onursal-Beşgül
Phone: +90 212 311 51 15
Fax: +90 212 257 87 48
E-mail: ozge.onursal@bilgi.edu.tr
Funding

Currently, the program receives DAAD-funding (funding after August 2019 is contigent on the prolongation of the funding by the DAAD). German and Turkish students both receive a scholarship for the period of their stay at the partner university.

There are no tuition fees charged for participants of the program. Bilgi students coming to Viadrina have to pay the university’s registration fee of approximately 200 € which includes a public transport ticket for the whole state of Brandenburg plus the capital Berlin. You can find more information about money matters here.

Regarding living expenses, Istanbul can be compared to any West European city. Accomodation (one room in a shared flat) is about 300 - 400 €/month, all inclusive. Food, clothing and transportation is a bit cheaper than in Germany. Students will need at least around 600 €/month to cover all living expenses.
If you need more detailed information on how to find a room in Istanbul, language classes and other practical tips, read the reports (last document tab on this page) of former Double Degree students (in German).

Housing in Frankfurt (Oder) is easier to find and cheaper than in Berlin (about 200 - 300 €/month per room in Frankfurt). However, Berlin is affordable for students (about 400 - 600 €/month per room). Students can travel for free to Berlin (one hour by train), because the train ticket is included in their student card. Complete living expenses in Germany are at least 600€ per month.

İstanbul Bilgi University and European University Viadrina share locations at the borders of two areas of different cultural influence: Istanbul between Europe and Asia, and Frankfurt (Oder) between what is perceived as former Eastern and Western Europe. In these demanding environments, both universities play special roles in building bridges of understanding and reconnaissance between the different nations and regions. The cities of İstanbul and Berlin (which is about one hour from Frankfurt Oder) play an important role as dynamic centres of the two countries. Istanbul is the capital of commercial, cultural and artistic life in Turkey. Similarly, Berlin offers a great variety of activities in culture and politics as well.

İstanbul Bilgi University was founded on 7 June 1996. Over time İstanbul Bilgi University has grown to encompass 4 main campuses that total 158,000 m2 and it is on these four campuses (Kuştepe 25,000 m2, Dolapdere 18,000 m2, santralistanbul 112,000 m2  and Kozyatağı 2,880 m2) that it continues to serve its students and the academic world in Turkey. The university currently has 25,000 students, nearly 1,000 academic staff members, 7 faculties, 5 institutes, 4 schools, 3 vocational schools, and 200 programs that provide education to its associate, undergraduate and graduate students. As of 2017, the university has graduated approximately 30,000 students. For more information you can visit official website. 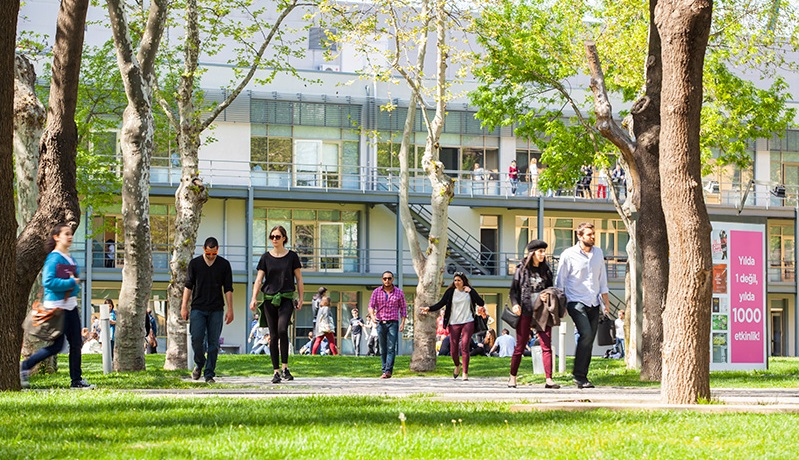 Since the reopening of the Viadrina in 1991, the European University has developed into an internationally renowned address on the German-Polish border, with approximately 6,000 students now enrolled. European and international aspects of law, economics and culture play a special roll in degree plans offered by our faculties of Law, Business Administration and Economics as well as Social and Cultural Sciences. Here you can find the European University Viadrina Cultural Studies Department introductory video. 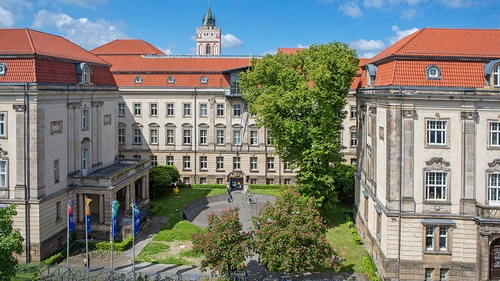 The European Institute at İstanbul Bilgi University is dedicated to research on EU politics and policy with specific emphasis on foreign policy, politics in the expanded EU neighbourhood and relations between Turkey and the EU within the scope of EU enlargement.

The Viadrina Institute for European Studies explores interdisciplinary social, political and cultural figurations on the European continent and in its global interdependencies. The focus is on historical and contemporary processes of Europeanization, including their inherent ambivalences. With this in mind, the IFES research aims to provide impulses for a well-founded reflection of "Europe" and to establish a critical perspective within the European Studies.

Here you can find the most important documents and links related to the "BİLGİ/Viadrina Double Degree".

One of our Double Degree students gives us an insight about life in Istanbul and studying at İstanbul Bilgi University in Europe & Me Magazine No. 10/2010
"Studying Europe in İstanbul"