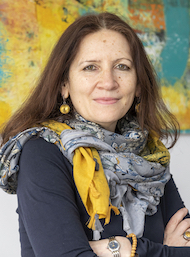 My academic work is located at the intersection of cultural and literary studies perspectives and focuses on two areas: The first is the history of German-language (including German-Jewish) literature, which I study in a European context. My research interests range from utopian concepts of modernism in the early 20th century to the deconstruction of historical narratives in contemporary literature. The second field of research covers relations between the German-speaking and East Slavic (Russian and Ukrainian) cultural areas. My focus here is on inter- and transculturality, German-Jewish-Slavic neighbourhood, cultural transfer, travel literature, border studies, imagology, literary migration experiences and mental maps of Eastern Europe. The last project in this area was dedicated to the topic "Ukraine as Palimpsest: German-Language Literature and the Ukrainian World from the Second Half of the 19th Century to the Present" (funded by the Fritz Thyssen Foundation). In my current project, I am dealing with the topography of Europe and landscapes of memory in the contemporary German-language family histories of Eastern European (post)migrants.