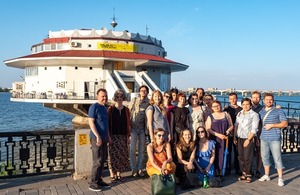 After Violence: The (Im-)Possibility of Understanding and Remembering

The Summer Academy “After Violence: The (Im-)Possibility of Understanding and Remembering” was the third one organized by the PRISMA UKRAЇNA Research Network Eastern Europe at the Forum Transregionale Studien Berlin. Two previous Academies took place in Berlin (December 2015) and Bucharest (February-March 2017). The one in Dnipro was organized together with the Centre for Governance and Culture at the Univesity of St. Gallen, European University Viadrina (Frankfurt/Oder), German Historical Institute Warsaw, the Centre for Applied Anthropology (Kyiv), and the Tkuma Ukrainian Institute for Holocaust Studies. The last institution hosted Academy in southern Ukrainian city of Dnipro (until 1926 Ekaterinoslav, until 2016 Dnipropetrovsk).

The Summer Academy addressed issues related to the understanding and remembering of physical and symbolic violence; witnessing, commemorating and silencing the memories of a traumatic past in various kinds of narrative texts (oral and written memories, fiction, historiography, cinema, graphic arts, monuments etc).

Participants of the Academy were students, doctoral students and post-docs in anthropology, cinema and audio-visual studies, history, literary studies, political sciences from the universities and academic institutes in Belarus, Finland, France, Germany, the Great Britain, Hungary, Japan, the Netherlands, Poland, Romania, and Ukraine. The thematic scope of their project presentations included individual and public memories of the Second World War in Belarus, Lithuania, Russia and Ukraine; the history of forced migrations on the Polish-Ukrainian borderland in 1944-1951, the history of Armenian refugees in the Greater Romania in 1915-1940, and the history of Czech-German children in post-1945 Czechoslovakia; the public history in post-Maidan Ukraine and the heroization of the Yugoslav wars in Serbia; the memories of Russian-speaking Jewish migrants to Germany and sexuality in the aftermath of violence in Bosnia.

The Summer Academy was opened by a public lecture of Tetiana Portnova (Dnipro National University) “How to Read the City? Dnipro and its Histories” which introduced the crucial part of Academy`s program – interaction with the city – one of the biggest Ukrainian cities with its complex past which includes Russian imperial projects, Soviet “closed status” because of the rocket missile industry, city`s complex Jewish and Ukrainian heritage.

The Academy program included visits to Museum “Jewish Memory and Holocaust in Ukraine”, the “Anti-Terrorist Operation” Museum and the Diorama “Battle for Dnipro 1943” and two excursions “The Remains of Ekaterinoslav`s History” and “The Remains of Soviet Dnipropetrovsk”. All the excursions were designed and presented by Denys Shatalov (Tkuma Ukrainian Institute for Holocaust Studies).

These experiences were deepened by the fieldwork in three groups aimed at getting closer with a place and its people – fieldwork was preceded by a practicum lecture by Iuliia Buyskykh (Centre for Applied Anthropology, Kyiv) “Fiedlwork in Dnipro: Theory, Merhods and Production of Anthropological Knowledge”.

Other guest lectures (opened also for the local public) included a talk by Jan C. Behrends (Centre for Contemporary History, Potsdam) “Researching Violence in Socialist and Post-Socialist Societies”, a source seminar by Carmen Scheide (University of Bern) “The Impact of War, Violence and Dislocation on Lifeworlds of Ostarbeiter”, and a public lecture by Serhii Plokhy (Harvard University) “Chernobyl as a Warning: Nuclear Energy and the Arrogance of Man”. Another format was a roundtable devoted to the personal strategies in present-day humanities and social sciences moderated by Iuliia Buyskykh and Viktoriia Serhiienko (M. Hrushevsky Institute of Ukrainian Archeography and Source Studies, Kyiv).

As part of the Academy the Museum “Jewish Memory and Holocaust in Ukraine” saw an opening of the art exhibition by Andrii and Lia Dostliev “I still feel sorry when I throw away food – Grandma used to tell me stories about the Holodomor”.

Chair of Entangled History of Ukraine