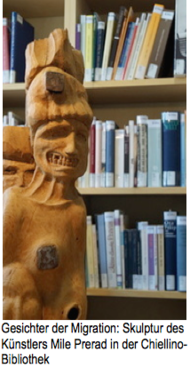 The Italian poet and literary scholar Carmine Gino Chiellino, who lives in Germany,The Italian poet and literary scholar Carmine Gino Chiellino - winner of the Adelbert von Chamisso Prize and one of the most distinguished researchers on questions of literature and migration - has bequeathed his estate to the Axel Springer Chair of German-Jewish Literary and Cultural History, Exile and Migration. It consists of nearly one thousand works of thematically relevant primary and secondary literature, unique archival materials such as manuscripts, correspondence and works of visual art. The Chiellino Library, which was launched by a reading on 9 July 2018 with Mr. Gino Chiellino at the Stadt- und Regionalbibliothek Frankfurt (Oder) and a commemorative lecture by Prof. Dr. Walter Schmitz and a panel discussion at the European Unversity Viadrina. The Chiellino Library represents the heart of the Chiellino Research Centre for Literature and Migration.

1,000 standard works on the subject area of literature and migration (primary and secondary literature) as well as all archive material is directly accessible there for interested researchers and students. It is a unique collection of anthologies and journals as well as literary works by over 250 authors in more than ten languages. These include works by Artur Becker, Franco Biondi, Wladimir Kaminer, Radek Knapp, Emine Sevgi Özdamar, Rafik Schami, Yoko Tawada, Antonio D'Alfonso, Ben Jelloun, Milan Kundera, Jorge Semprun, Gezin Hajdari, Arnold de Vos, Theodor Kallifatides, Catalin Dorian Florescu, Don DeLillo, Vladimir Nabokov, Salman Rushdie and many others. Numerous volumes are available in first editions and are supplemented by rare anthologies and journals, which are difficult to locate today and which were among the most important places of publication for many authors. The collection is supplemented by a library of the most important research literature on literature and migration.

After registering with the secretary's office of the Axel Springer Chair of German-Jewish Literary and Cultural History, Exile and Migration (contact person: Ms Elke Lange, Tel.: +49-(0)335-5534 2724, Email: elange@europa-uni.de, Room: GS 504), interested researchers and students have the opportunity to work with the collection at three workstations in a private atmosphere directly in the Chiellino Library.