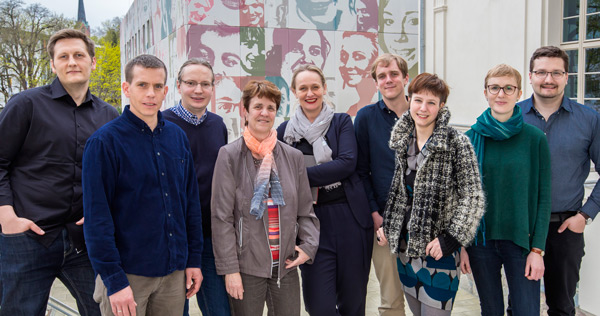 The team of the Chair of European Contemporary History broaches the topic of the past and present of the continent from the perspective of a complex and rich Eastern-European history. We stand for the standard of discussing, mediating and studying the contemporary history of Europe beyond the “national container” and beyond classic East-West stereotypes. In service of this framework, we explore newer interdisciplinary approaches of complex, transnational cultural history, which can be examined in their global, as well as their regional and local impact.

The analysis of processes of Europeanisation and concepts of Europe form a core area in the research of our chair. Here, we focus, on the one hand, on moments of Europeanisation as well as ideas of Europe that developed in the last centuries on the Eastern-European ‘peripheries’ and, from there, questioned and challenged the teleological Western self-image of Europe as a modern, market-based, democratic and liberal entity. On the other hand, we examine the regional forms of appropriation and dynamics of interdependence of Western models of Europe with local discourses about Europe in different historical contexts of Eastern Europe.

However, our research dos not halt at the borders of the European continent, but keeps the manifold local connections of Eastern Europe in their interactions with developments in mind. We are as interested in the history of pow-camp in Frankfurt (Oder) as in conflict-ridden history of the engagement with the US-American massacre of My-Lai during the Vietnam War, when both are being viewed in the context of the history of violence in the 20th century or the cold War. We examine global phenomena, such as Jewish emigration, within the framework of a European und transatlantic history of migration.

It is our intent to pique an intellectual curiosity and most of all the enjoyment of history that the French historian Marc Bloch ascribed to all devotion to the discipline. The basis for this is the conveyance of that which might be called the canon of historical knowledge. To meet engage with it with changing perspectives and methodological challenges keeps history alive and compelling. We are looking forward to meeting students who enjoy discussing controversial topics.

Please be registered beforehand via e-mail (sekretariat-cweber@europa-uni.de) before midnight on monday with a short indication of your of the what you wish to discuss.