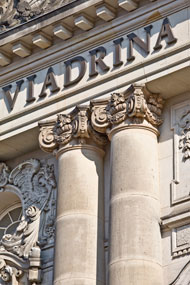 The main characteristic of the Chair of Comparative Politics is that it analyses the link between cultural phenomena, social transformation, and political structures and processes from the perspective of comparative political science, based on the assumption that power relations and culture are reciprocally interrelated.

Thus, in order to appreciate cultural phenomena – such as religious change – it is crucial to also consider the regime structures. In the same way, regime  structures cannot be understood without an analysis of the cultural foundations of politics – such as political culture – which may be enabling, supporting or stabilising these structures.
The teaching syllabus is centred on three core fields of comparative political science, namely the analysis of political systems, political movements, and political cultures. We are interested in how democracies and other governmental systems function, how political actors and their strategic behaviour can be understood, and how political culture comes to bear.
With respect to all of these three core fields we apply a well-established concept of politics distinguishing three dimensions: politics is conceived as political forms in terms of structures and institutions (polity), as political processes in the sense of conflicts and the involved actors (politics), and as political matters of concern, i.e. concrete issues, decisions, and politics of the state (policies).
Consequently, our teaching  aims at teaching the basic theoretical, methodological, and analytical principles of comparative political science and at enabling the students to apply those for the analysis of political, social, and cultural phenomena.
Our core areas of research
Publications (May, 2020)
Contact/Visiting Hours